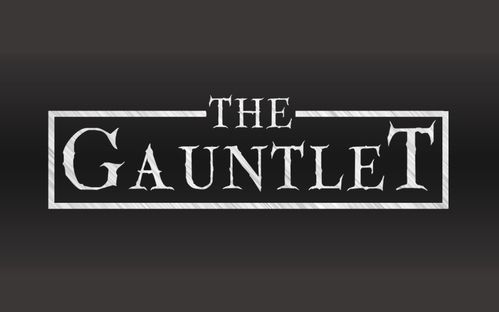 The GAUNTLET has long been one of the highlights of the year for our youth group! It has brought the teens closer through competition and fun. The GAUNTLET is a series of games where teams can earn points to win the competition for their team!

Normal we divide the youth group up into 2 - 4 teams and have a month or two months long competition with the GAUNTLET as the final day to earn points. When we divide into four teams we separate by age groups (7th-9th girls |7th-9th boys |10-12th girls |10th-12th boys). We have also done just Guys vs Girls, or we have done 10th-12th grade girls and 7th-9th grade boys VS 10th-12th grade boys and 7th-9th grade girls. Any way you divide it is a blast!

How It Works:
Start by dividing your youth group. The first Sunday Morning tell them the teams, and have them come up with team names! Then tell them how long the contest will be going and about the Final activity - THE GAUNTLET (just don't tell them what they will be doing at the gauntlet. Make them anticipate)! Once that is all figured out tell them how they can win points for their team. ***Here are some points ideas - Bring a Vistor (1000 points) | Bring your Bible (100 points) | Tracts handed out (10 points per tract) | Attend Sunday School (100 points per person on your team) | Etc.

Make sure to keep track of points every week and keep a running total that you can announce every week!!!

THE GAUNTLET:
Make this a Friday or Saturday (whatever night you do teen activities) evening activity at the end of the two months.

It is the final day of the contest, and now all the teams are gathered for the final activity to see who the winner of the contest will be! At the start of the GAUNTLET, tell the standings of the teams from the points they have earned every Sunday for the past two months!

The GAUNTLET is a series of games set up throughout your church, gym, school, outside. You will want about 10-15 different games. Some need to be where the whole team comes together and some need to be smaller games where different groups from the teams can face each other to score points. Each game needs to award points for each place --- 2 Teams - 1st (1000 points) 2nd (450 points) | 4 Teams - 1st (1000 points) 2nd (800 points) 3rd (600 points) 4th (400 points)! At the end of the night have all the teams come together to the final place for the LAST CONTEST of the GAUNTLET! This will be the final event of the two month long contest so make it the most exciting! Every year we end with A CLAYS MILL CLASSIC - PEEP WARS (description at the bottom)! The whole night you have been keeping score, but don't tell who is winning or by how much until the end. Tally up the points and announce the winner!

Game Ideas For The GAUNTLET :
1.) Hungry Hippos - Get the most balloons from the middle area back to your teams side.
Items Needed: 1 Furniture Dolly per team, 1 rope per team to tie to the end of the furniture Dolly, 1 blind fold per team, 1 laundry basket per team, a bunch of balloons. - one person pushed the teammate lying flat on the furniture dolly they get one push and that person must use the basket in their hand to get the balloons back to their side. The launcher must use the rope to pull back. Count balloons and go another round

3.) Spell It Out
Items Needed: Alphabet soup per team, 1 bowl per team,  towels - they must spell out a book of the Bible using the noodle in the soup, but the only way they can get letters out of the soup is to use their mouth.

4.) Cheeto Toss
Items Needed: Peanut Butter, Table, Cheeto puff balls
One player from each team puts peanut butter on their face another teammate must stand a certain distance away and throw Cheeto puffs and try to get them to stick to the peanut butter. Give points per Cheeto puff on the each face.

THE FINAL EVENT - Peep Warz - Line up four peeps on each end of an 8ft table each team gets to slide the fifth peep across the table to the other side and knock their peeps off. First team to knock all the other peeps off is the winner
Posted in YPActivities