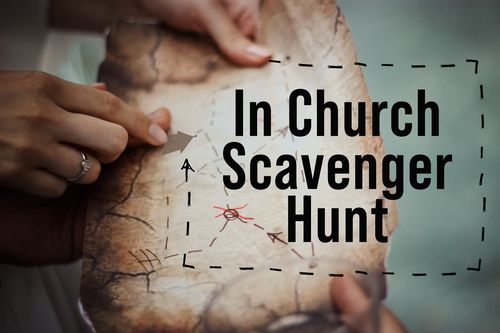 Scavenger Relay Structure:
Split up into 2 teams (3 or 4 teams if larger group of 25 plus). All teams are located together in a central location. Each team then receives a bucket or container filled with slips of paper (each team has the same items). Upon “go!”, the first person on each team draws a slip of paper and must go retrieve the item on that slip (ie: a songbook from the church auditorium). Once the first player on the team has returned to the central location with the item, the next person in line for that team can draw a slip of paper and retrieve their item. After the round is over Teens must return the item to its proper place
I did not do this, but you can create riddles to describe the items (it just takes more prep)

Churchwide Scavenger Hunt Structure:
Each team is assigned a color and x amount of cups in that color (we did purple and blue cups from Dollar Tree) Before the activity, hide the cups throughout whatever the “arena” is; we did the entire church building (minus a few “off limits” areas). Hide them in pairs (one of each color), but not in the exact same location (ie: a purple cup in a microwave but a blue in the refrigerator) this way teens could not shadow the other team and get free finds.  They could know there’s a cup somewhere in the nearby vicinity but not the exact location. Wise tip to help - Take pictures of each location a cup is hidden or have a spreadsheet listing each location; this will allow you to mark which cups have been found for each team. Some prep here but I found it very advantageous. Have a third color cup (ie: green) and an odd number of them hidden (to avoid a tie) in more difficult locations than the team color cups. Give point values for the team cups and a higher point value for the green cups. Begin everyone in a set location and explain the breakdown, specify “off limits” areas, rules etc. Upon “Go!”, the teens scatter throughout the facility and begin looking for their team’s cups. They cannot retrieve or tamper with the other team’s cups; if they find one of the other team’s cups, their goal is to not reveal to them where it is. The green cups are up for grabs by either team. When a cup is found, they have to bring it back to the starting location. Once certain rooms or zones are empty of cups, announce that or lock the room so teens aren’t looking for cups that aren’t there. The team that brings all their team color cups first gets bonus points; team with the most points at the end of the game wins!