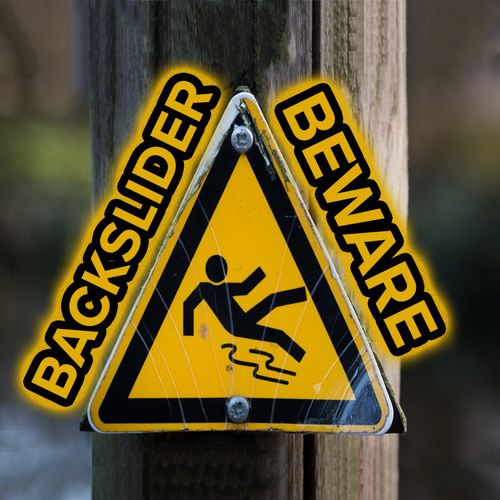 1 SAMUEL 15:9-11 “But Saul and the people spared Agag, and the best of the sheep, and of the oxen, and of the fatlings, and the lambs, and all that was good, and would not utterly destroy them: but every thing that was vile and refuse, that they destroyed utterly. Then came the word of the Lord unto Samuel, saying, It repenteth me that I have set up Saul to be king: for he is turned back from following me, and hath not performed my commandments. And it grieved Samuel; and he cried unto the Lord all night.”

Far too often I’m afraid some Christians could stand, testify and say the exact same thing, “I’m not what I used to be!” but rather than it being a positive statement, it could be a very negative indictment! “I used to be…a soul winner, separated, on fire for God” etc.

When a person is biblically born-again, they are instantly and eternally saved, sealed, and set for Heaven! BUT every child of God is more than able to fall away from the perfect will of God for their life! Every believer can backslide! Sins of varying types and sizes daily tempt you and I as Christians away from the blessings that God desires us to enjoy. They attempt to tow us back to bondage, emptiness, brokenness, and powerlessness!

Sir Isaac Newton once made a statement that is very significant not just for the science class but also for our spiritual life. He stated, “To every action there is an equal and opposite reaction.” –There cannot be movement by one object, without it adversely, negatively, detrimentally affecting another object! It reminds me of the poem, “My life will touch a thousand lives before the day is done, and leave a mark for bad or good ere sets the setting sun.”

Samuel loved Saul. He’d invested in him. When Saul did wrong it broke Samuel’s heart. Verse 11 reads, “And it grieved Samuel…” Notice, it wasn’t Samuel that sinned, it was not Samuel who messed up, it was not Samuel who backslide, but yet, at the very moment the Prophet received the news that Saul had sinned and slipped up, it was Samuel who was obviously, directly, deeply impacted Saul’s disobedience! Let’s strive to obey God. Let’s stay in His will. Our lives ought to motivate others to be better Christians, not bitter or broken hearted.