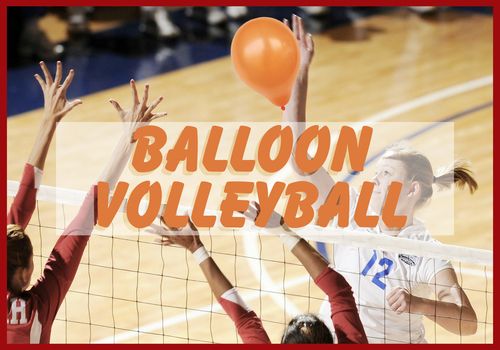 To have the least amount of balloons on your side when the time ends.

Balloons, *OPTIONAL* A Large tarp or plastic sheet to form a net\barrier between the sides. You can just have no barrier except an invisible line down the middle of the room between the two teams both work.

Blow up as many balloons as you want and divide them evenly between the two teams. Each team must stay on their side of the middle barrier. No player may go to the other team's side. Start the timer and give them from 2-5 minutes. The teams must then hit their balloons over to the other teams side. Players continue to keep hitting the balloons back and forth between the two teams until the time runs out. The team with the most amount of balloons on their side loses! A popped balloon counts as a balloon being on that side for that round only. Play as many rounds as you want - usually 3-5 rounds is the optimal game so about a 10- 15 minutes game, but tons of fun!
Posted in YPGames
Tagged with YPGames, volleyball, balloon