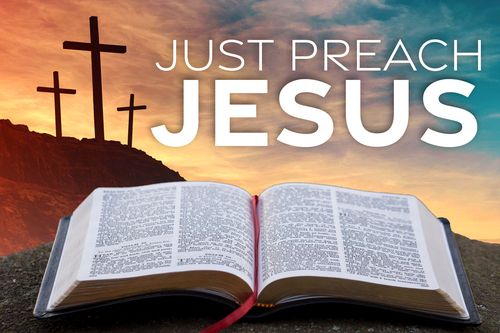 In an era of Biblical Apostasy, a young preacher must be very careful when navigating the “Just Preach Jesus” crowd. They say a lot of spiritual things, and I must admit that at a surface glance their terminology appears to be defensible. After all, who could argue with someone who just preaches Jesus, right?
I want you to examine some of the phrases that they use:
Yes sir, all of those things sound appealing. After all, you would be a fool to argue that Jesus is not the center of everything that we do! These phrases are not really the problem. The problem is that they have hijacked them with unbiblical philosophies! Here is what they really are saying:
Then of course they make sure to dumbfound you with their go-to verse:  I Corinthians 2:2 “For I determined not to know anything among you, save Jesus Christ, and him crucified.”
“You see! All that matters is preaching Jesus. It worked for Paul!” Says this “JPJ” crowd.
So what is wrong with their philosophy? I am going to show us a Biblical approach to counter each one of the unbiblical assessments we stated earlier. I hope they will be a blessing to you!
Approach #1 (We Don’t Do Doctrine, It Is Divisive)
Approach #2 (We aren’t going to focus on anything but Just Preaching Jesus)
Approach #3 (We are a Christ-Centered Ministry)
Mark this crowd and avoid them! They need to defend their “Just preaching Jesus” by using a very weak facade of spirituality. Don’t fall for it! Young preacher, don’t ever be ashamed to Preach the Entire Word of God! Don’t ever be ashamed to be an Independent Fundamental Baptist! By the way, you had better be a Student of the Word or these guys will influence you. Keep serving the King of Kings!