New Titles From The Old Book 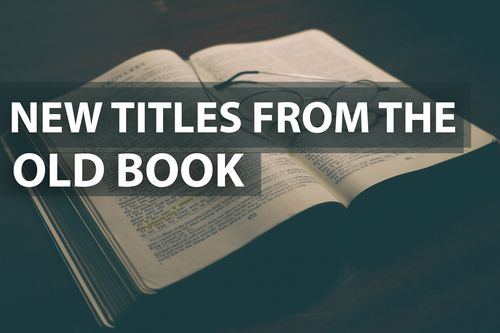 1 Timothy 1:15 "This is a faithful saying, and worthy of all acceptation, that Christ Jesus came into the world to save sinners; of whom I am chief."
A man’s title is important to him. A doctor should be called “Doctor”, a judge should be referred to as “Your Honor”, and a President should be referred to as “Mr. President”. Men heap to themselves titles. There is an unspoken contest on how many letters can be placed after a name. It is understandable, because a man’s name is more valuable than riches. Jesus Christ’s name is only below God’s Word in terms of magnification. God himself has many titles and names given in the Holy King James Bible. Men seek for titles, but what titles should men of
God seek? Paul makes a statement that is preached on often:
Paul details in Philippians his many titles. “Hebrew of the Hebrews,” “of the tribe of Benjamin,” and “Pharisee” are among his “confidence of the flesh”. Paul goes on to say that these titles, this significance of his carnal life, are all for nothing in relation to Christ. Men often use their earthly titles to excuse their living. Refusing to serve, or to follow the will of God in their life, because of who they are, what they make, or what they do. Paul wrote to Timothy some new titles that he took on for himself:
1. Chief of Sinners. 1 Timothy 1:15
The phrase is, “Too many chiefs and not enough Indians.” People desire to be the chief wherever they are. Seeking to climb the mountain of social graces to get attention or benefits. Paul decided he was a chief of sinners. Take note of who most publicly preached Jesus Christ. Nicodemus and Joseph had many titles, but were closeted disciples. The woman at the well was a harlot, and she went on to witness to her city for Christ. Paul kept himself humble by reminding himself and young Timothy. “My title is chief. The chief of sinners.”
2. Doctor in Godliness 1 Timothy 4:8-10
For bodily exercise profiteth little: but godliness is profitable unto all things, having promise of the life that now is, and of that which is to come. This is a faithful saying and worthy of all acceptation. For therefore we both labour and suffer reproach, because we trust in the living God, who is the Saviour of all men, specially of those that believe. What is your expertise? In what subject do you hold your degree? Being a “doctor of godliness” does not mean a person is entitled to be holier-than-thou. It means that the practice the man of God performs is a practice of using God and Christ likeness to solve the issues of life. A plumber uses a pipe wrench to solve his problems, a carpenter a framing hammer, and so a man of God should study, practice, and work in the area of godliness to perform his profession.
3. President of Endurance 2 Timothy 2:10-12
Therefore I endure all things for the elect’s sakes, that they may also obtain the salvation which is in Christ Jesus with eternal glory. It is a faithful saying: For if we be dead with him, we shall also live with him: If we suffer, we shall also reign with him: if we deny him, he also will deny us: People desire to be over other people in leadership. They strive to be “elect” and to “reign”. Peter, Paul, and the other apostles wrote and taught a very important lesson that they had learned from Christ. As a Christian, it is an honor to lift up others and to serve. It is not as honorable to be first. Paul was in charge. He was a leader. What did he lead in? Endurance, dying to self, suffering. Men strive for titles. Even men of God. Let us strive for these new titles from the old book. Learn to lead in suffering, practice godliness, and remember that we are simply chief of sinners.