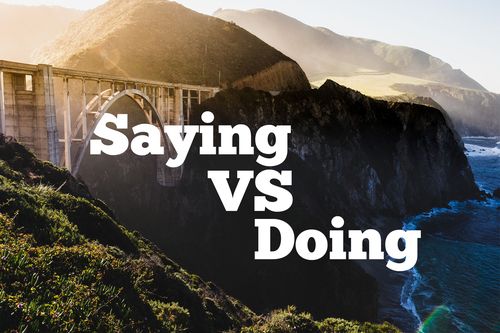 Since my dad is from Minnesota and since most of his family still lives there, I have been there many times for family reunions. On one occasion, he took us kids to an old train bridge from which he and his friends used to jump into the river about thirty feet below. I had never jumped from anything that high, but, with confidence, I said I would have no problem jumping off it. But then came the test. I was standing on the rail in my swimming shorts, gazing at the water below, which felt more like sixty feet than thirty. I realized then that saying I was going to do it was completely different than actually doing it. When I finally found the boldness to let myself fall into the water, it shockingly became fun, and I did it several more times.

You see, I can say that I am going to climb Mt. Everest, but I cannot claim the accomplishment until I’ve done it. A child can tell his mom he is going to clean his room, but it counts for nothing until he actually does it. Many Christians say they are going to serve Christ with their lives, but their actions prove otherwise. Saying you are going to serve God will not earn you any rewards in Heaven until you actually do it. It is often in a special meeting or conference that people feel the convicting power of the Word of God and decide to serve Him. When they get home, however, they get back into their regular routines, and all the things they told God they were going to do to change how they were living become nothing more than talk. There is a huge difference between saying you are going to do something and actually doing it.

If everyone in the world did everything they said they were going to do, then there would be some pretty amazing feats accomplished, and a lot of lives would be very different. That is, sadly, the same position many Christians find themselves in spiritually, as well. Be sure that, when you make a positive spiritual decision, it moves from saying into doing. God cannot use someone who only says he will do right, but He will most certainly will use the person who actually does.